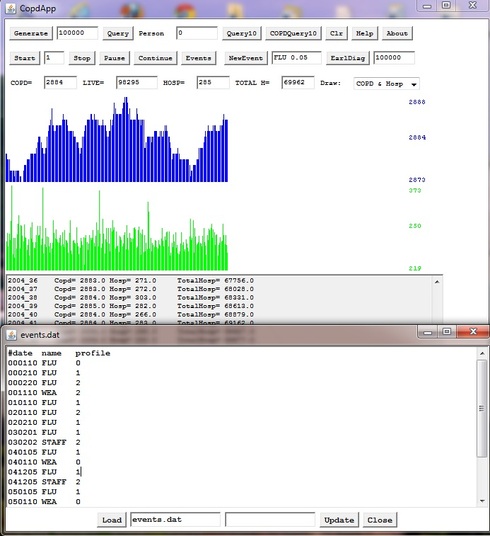 Agent Based Simulation for managing COPD in a self-contained NHS region in the UK. Our primary objectives are to:

COPD is an umbrella term, which covers smoking-related conditions such as chronic bronchitis and emphysema - and is often called ‘the hidden killer’ because of its lack of public profile. It kills approximately 30 thousand people a year in the UK.

Agent Based Simulations are a relatively new computing approach. They are suitable for real life problems where there is a medium to large number of interacting agents. Often the development of an Agent Based Simulation itself is useful and educational, and the end product is not something that tells us about the future but is more like a virtual lab to experiment with ideas, and to test possible real life scenarios in a safe environment. Where available, simulations can use properties of real agents, otherwise statistical distributions of real agents are used to generate virtual agents. When real agents are used, simulations of the past can be used to validate the system, and then the system can be used to speculate about the future.

The COPD simulator models a number of agents in a NHS region with a population of around 100,000 people. These people are modelled using statistical distributions and samples available for the region. Each agent has properties such as Name, Gender, Occupation, Education, Smoking Habits, COPD state, Diagnosis, Severity Level, Co-morbidities, Willingness to come to appointments, and Willingness to take medicine. In addition to these, the model contains a number of Primary Health Clinics, Emergency Services, Pulmonary Rehabilitation Units and health care workers. Health related agents can start Anti-Smoking campaigns, Flu immunisation schemes, COPD Rehabilitation Centres and Early Diagnosis initiatives including the use of Spirometry, all entailing costs and benefits to the NHS.

We plan that the simulation period is 30 years starting from 2000 going into 2030.  The simulation runs in weekly simulation steps, and at every step it generates the total number of patients, their COPD stage of severity, quality of service they receive and total cost to the NHS. The simulator enables the running of what-if scenarios in terms of investment decisions as well as taking a number of programmed possible actions against the disease.

We planned a number of some random, and some user-defined events such as:

Throughout the simulation process, patient agents are influenced by the events described above. They may have Flu, Primary Care, Acute Treatment, Outpatient or Pulmonary Rehabilitation episodes. Patients become happy or unhappy depending on the staffing levels and quality of service they receive, and die in line with the statistical chance.

The simulation is developed as a Java applet, and can be placed on a website to be accessed by all the parties involved in COPD. Users can access and run the simulator, and test out their ideas about COPD care. We plan to apply the technology to other chronic disease management tasks in healthcare.